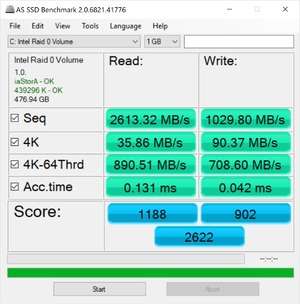 A review of AS SSD Benchmark by Fernando Ortega

AS SSD Benchmark is a simple and portable utility which helps you measure the effectiveness and performance of any solid state (SSD) drives connected to your system.

The main user interface here is minimalistic and allows you to get right down to testing speeds. To start, select the drive in the top-left corner and then hit "Start" at the bottom of the program. It will test "Seq", "4K", "4K-64Thrd" and Access Time. At the end, it will give your SSD a score. 4K tests the read/write abilities by access random 4K blocks while the Seq test measures how fast the drive can read a 1GB file.

Other tests AS SSD Benchmark undertakes are available under the Tools menu. The Copy-Benchmark tests how fast the drive is able to copy files while the Compression-Benchmark measures how fast your SSD can compress data.

AS SSD Benchmark is small and useful tool and is able to give you a little bit of insight into how well an SSD works.

AS SSD Benchmark is software which can benchmark hard drive speed.

This download is licensed as freeware for the Windows (32-bit and 64-bit) operating system on a laptop or desktop PC from benchmark software without restrictions. AS SSD Benchmark 2.0.7316.34247 is available to all software users as a free download for Windows 10 PCs but also without a hitch on Windows 7 and Windows 8.

Compatibility with this SSD benchmarking software may vary, but will generally run fine under Microsoft Windows 10, Windows 8, Windows 8.1, Windows 7, Windows Vista and Windows XP on either a 32-bit or 64-bit setup. A separate x64 version may be available from Alex Schepeljanski.

The program was created by the developer as a freeware product, but donations for the continued development are highly appreciated. You may generally make a donation via the developer's main web site.

Screenshots of AS SSD Benchmark (8)

Ranking in
Benchmarking Software
#5 of 45